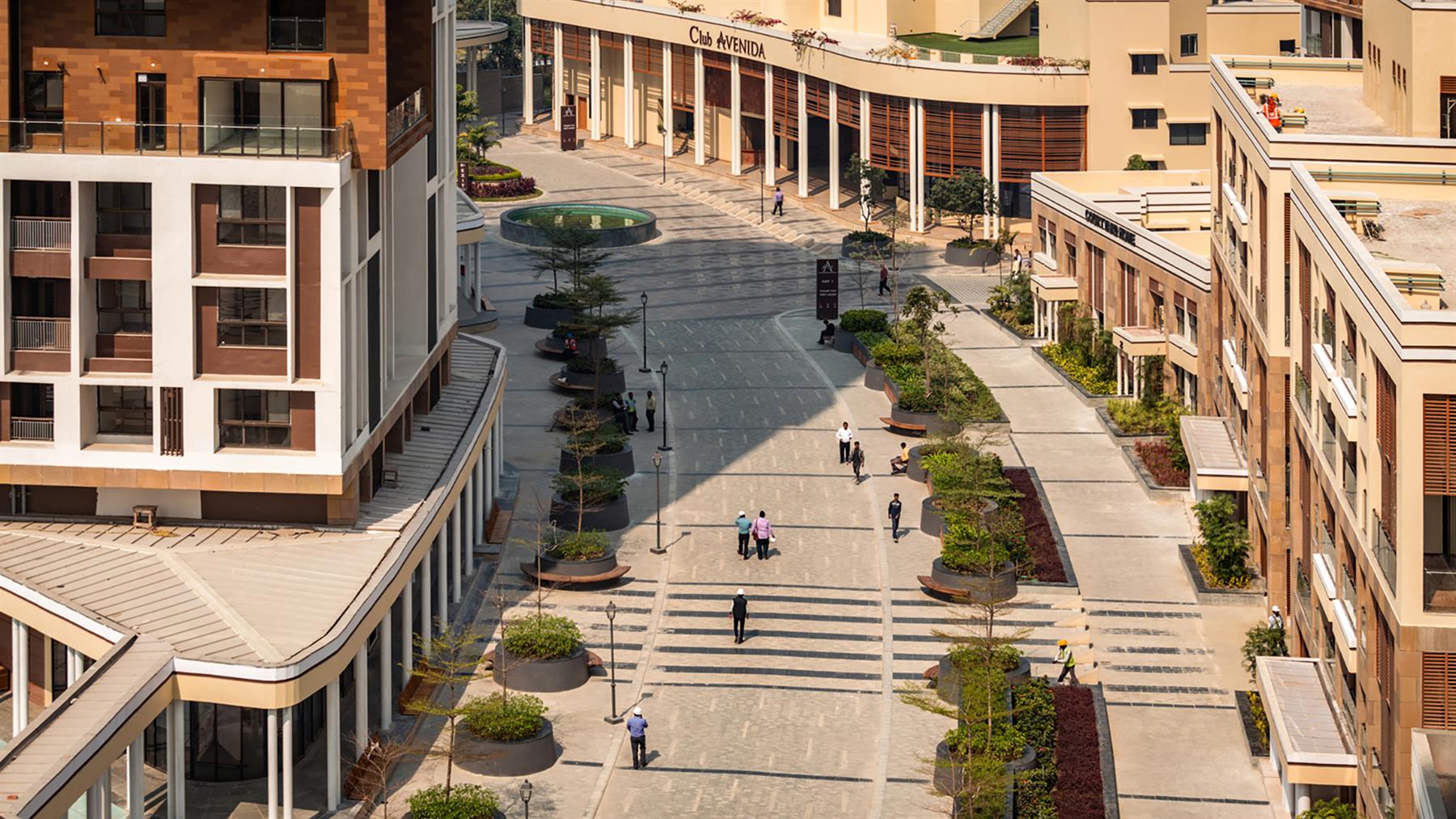 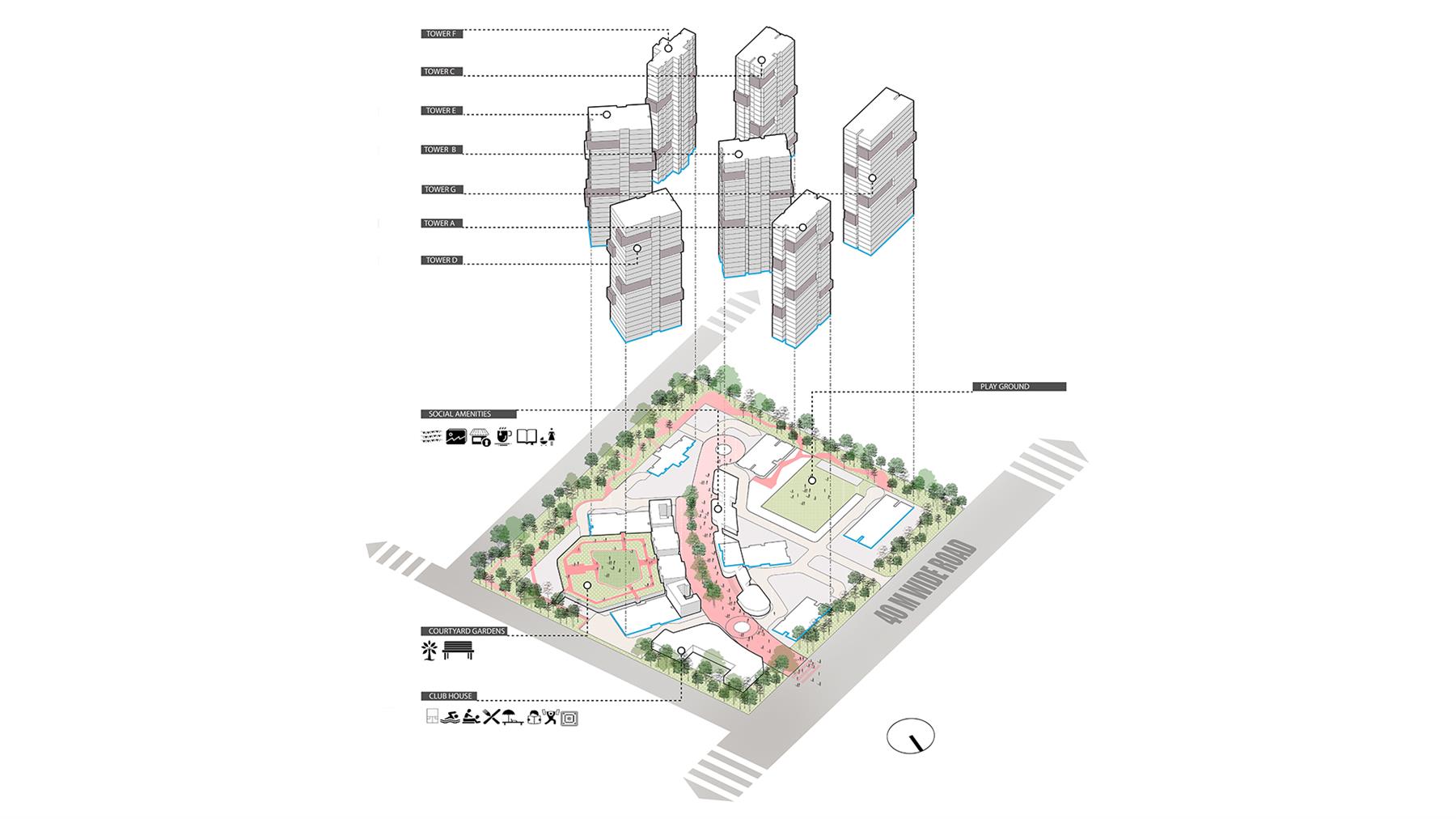 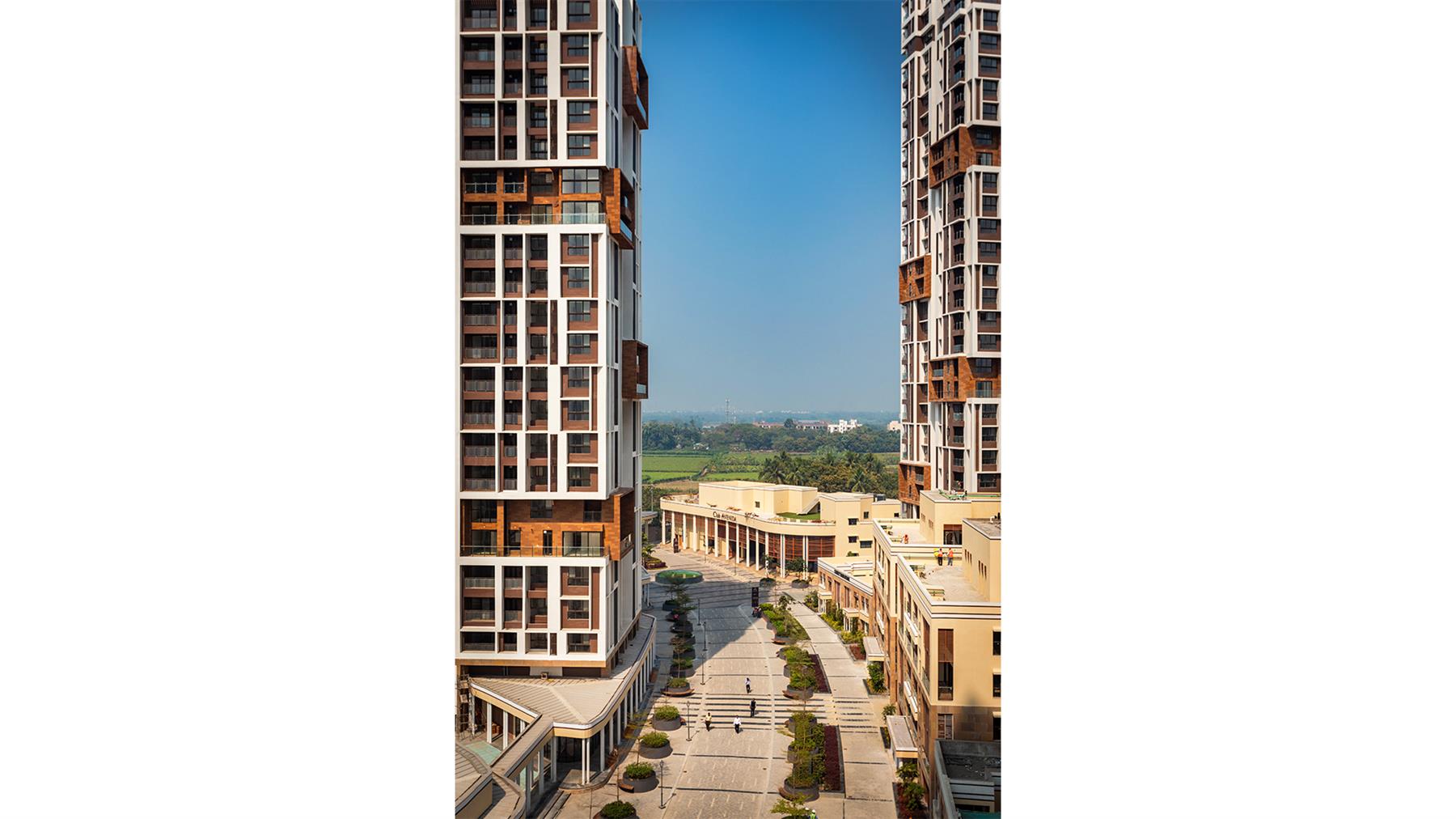 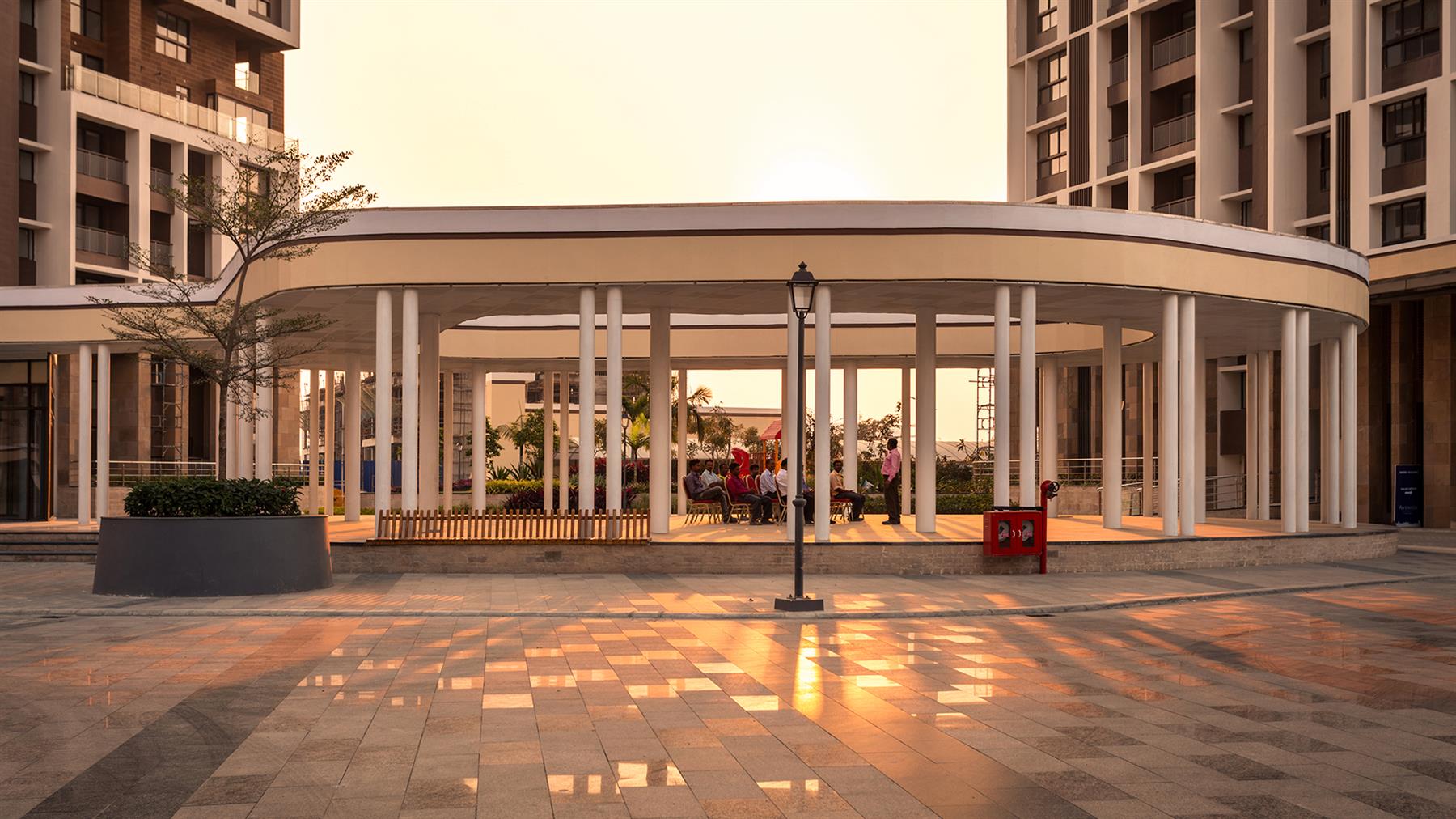 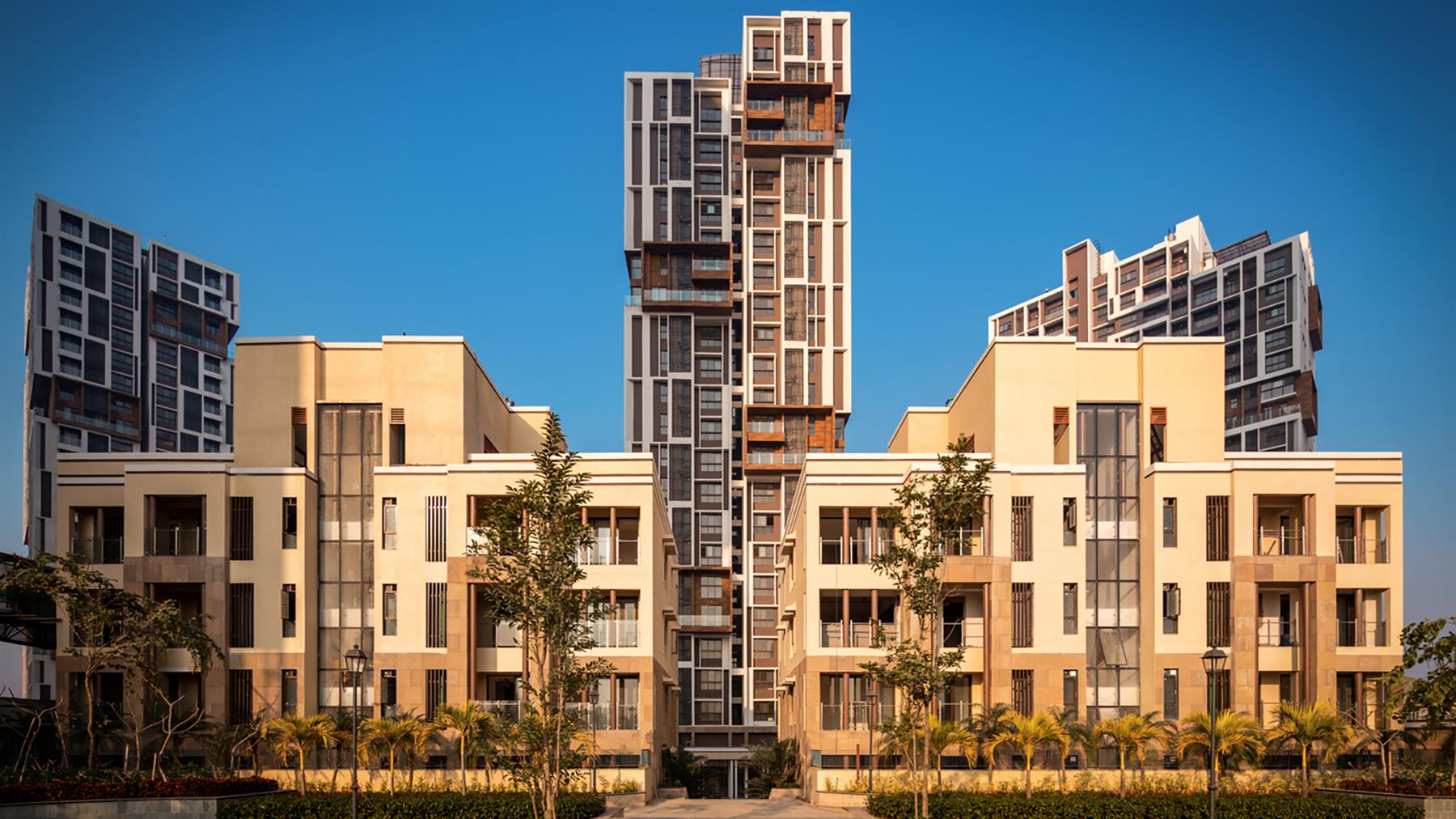 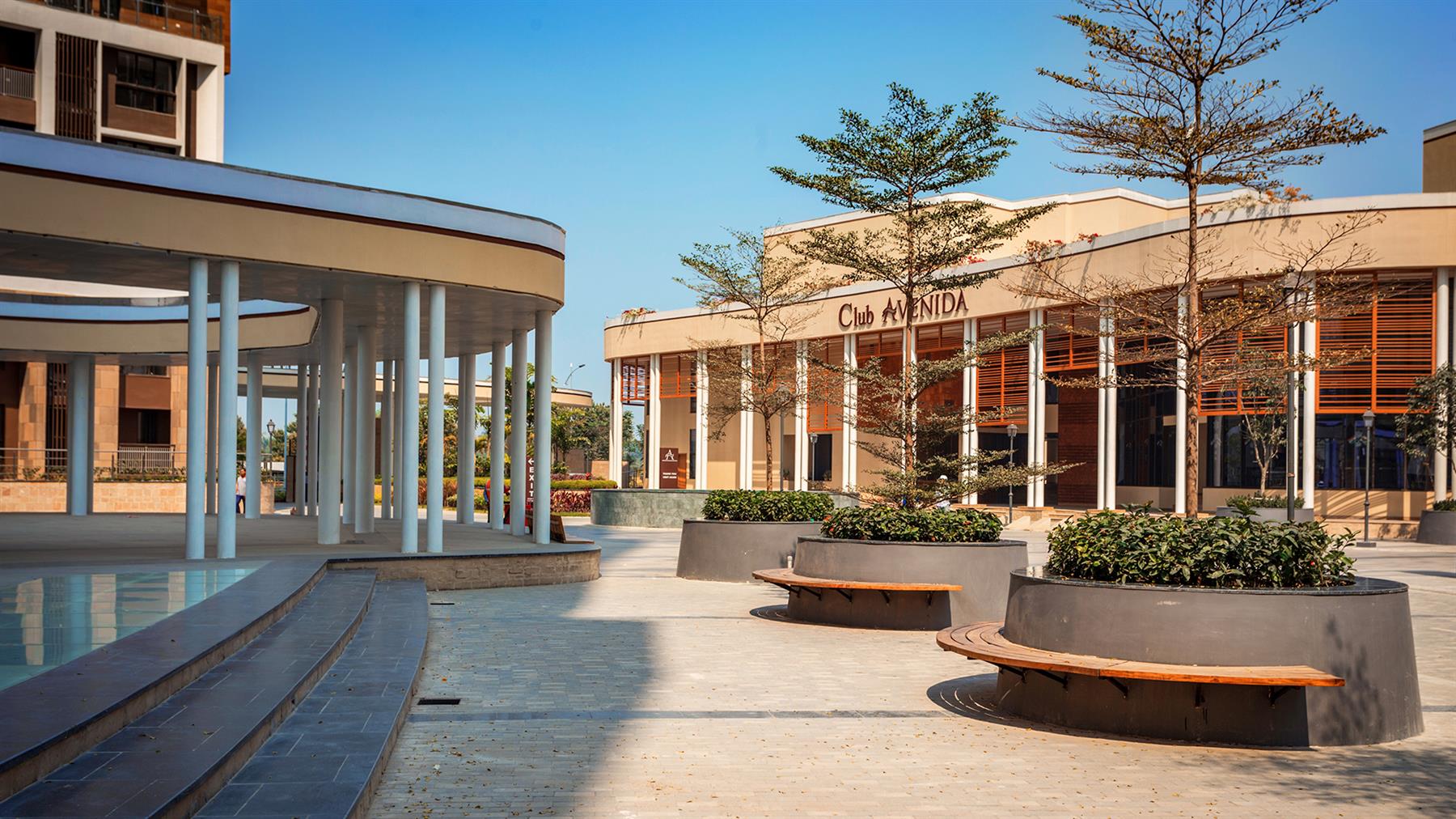 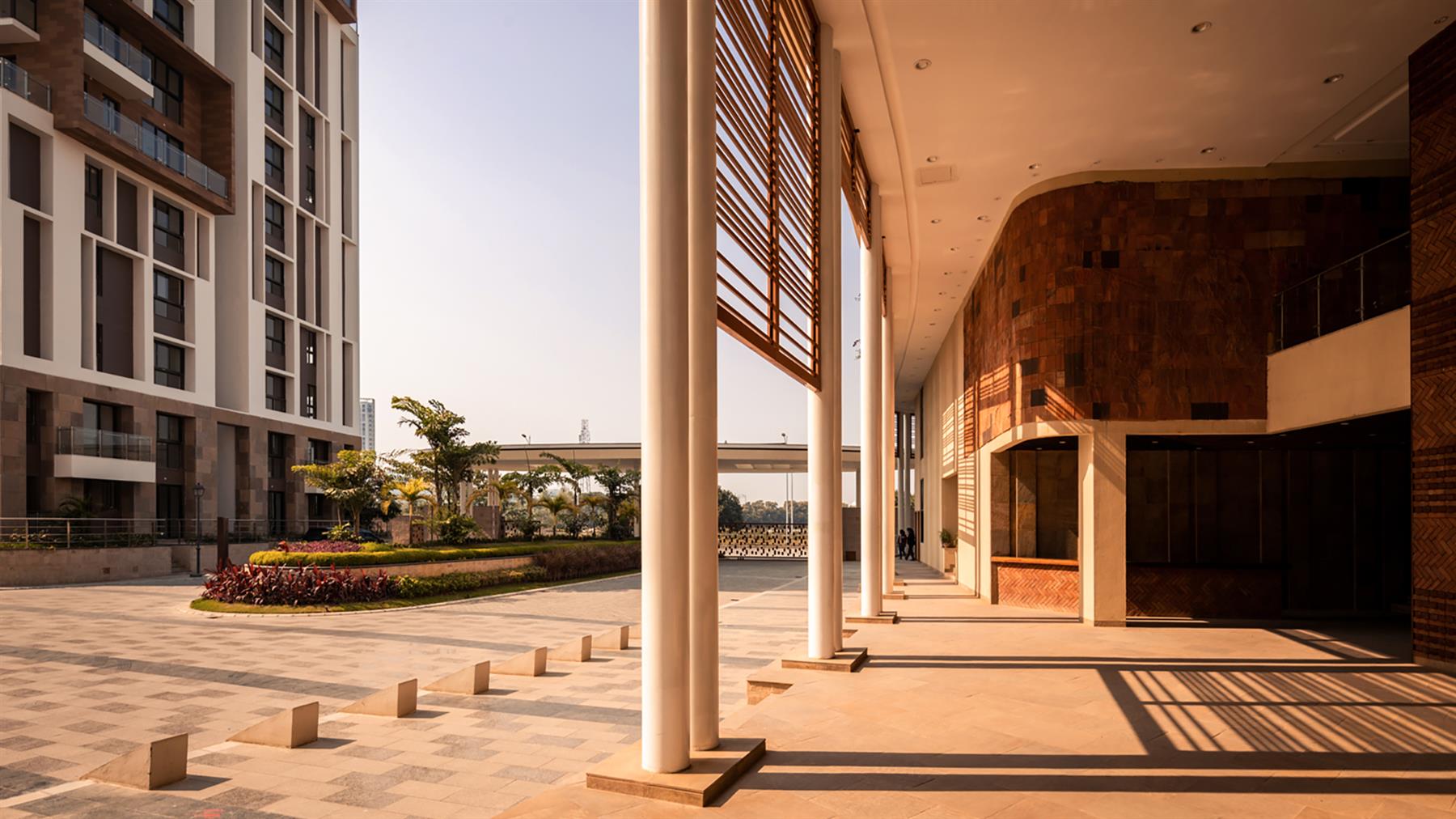 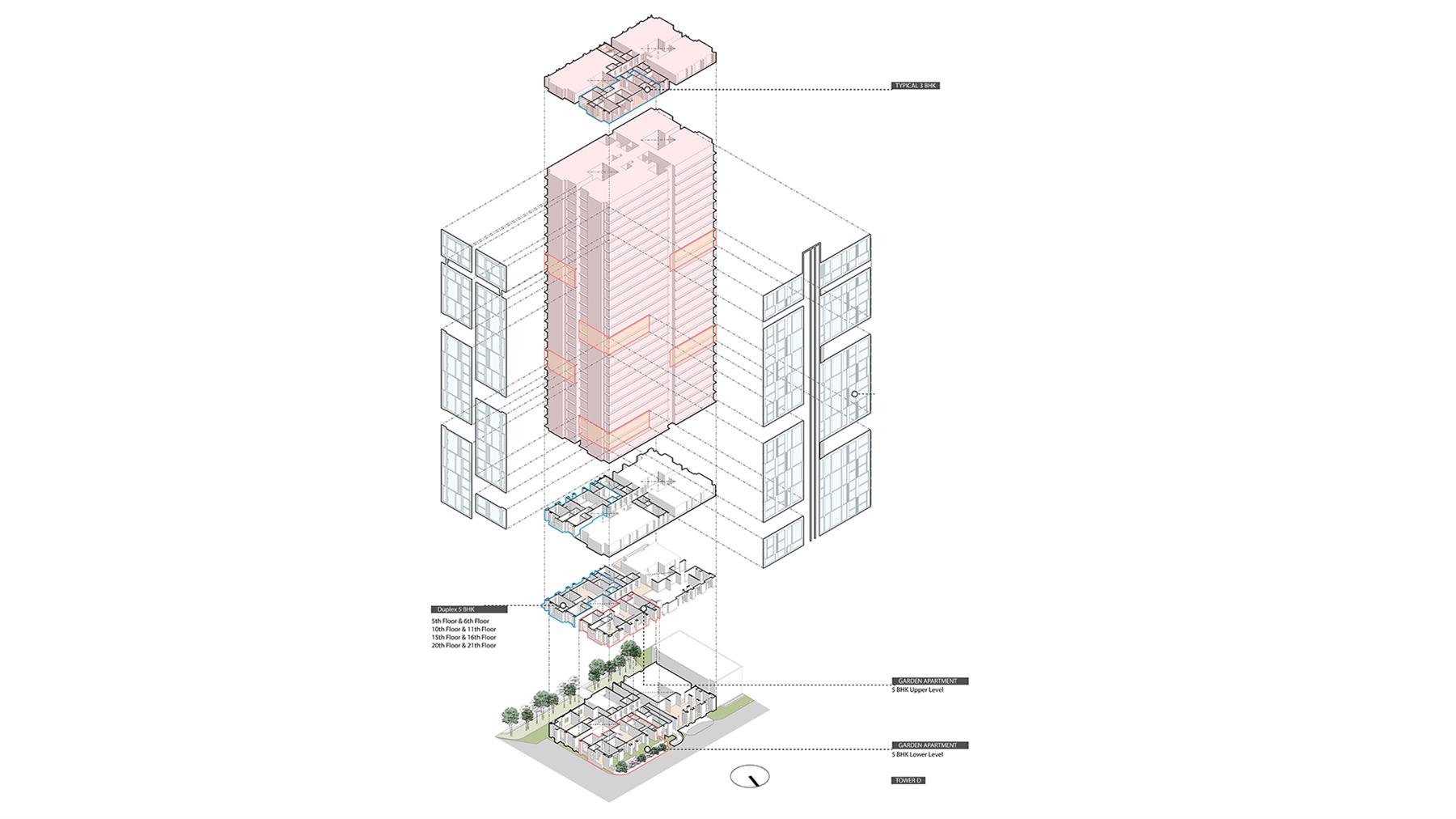 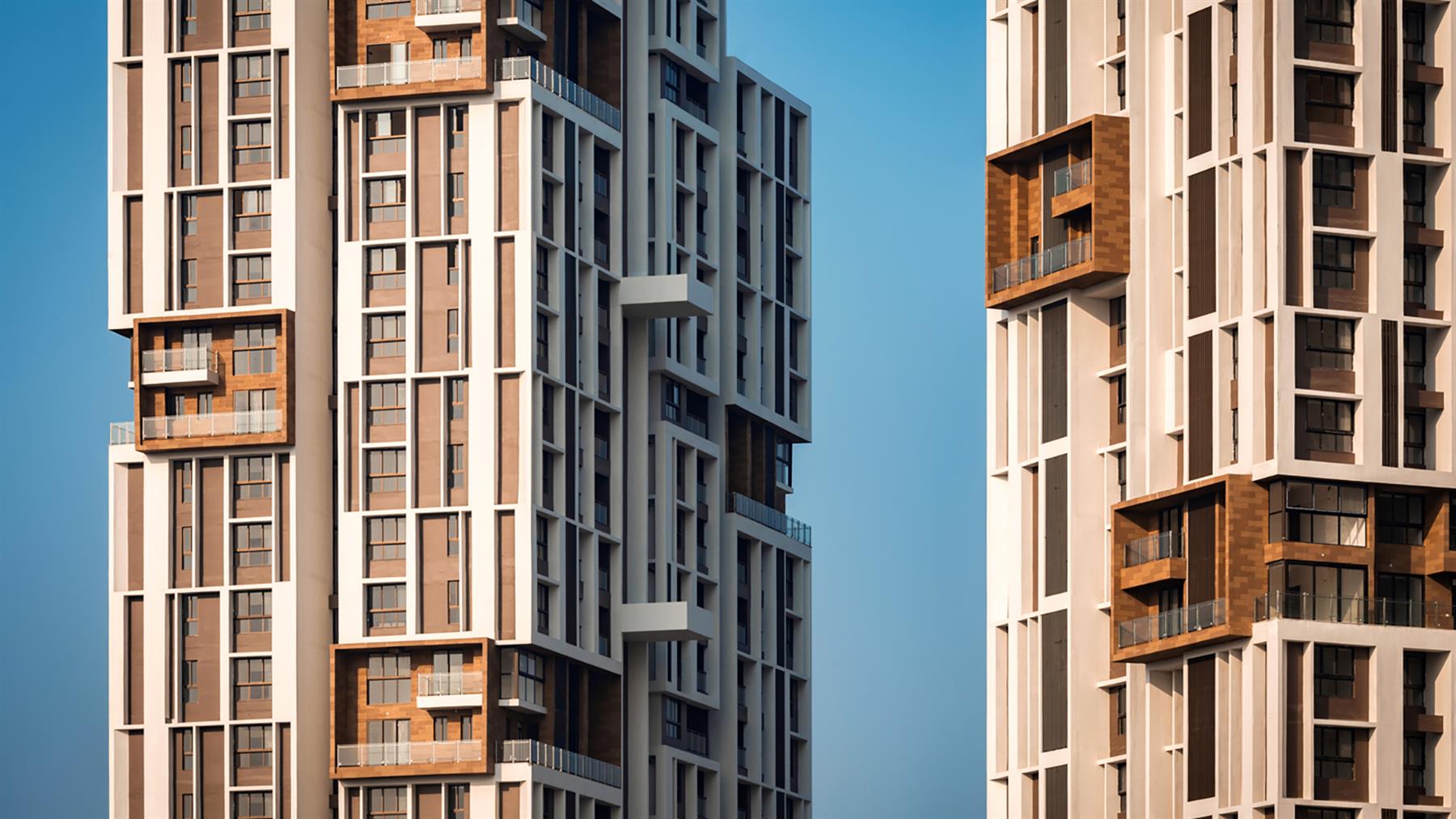 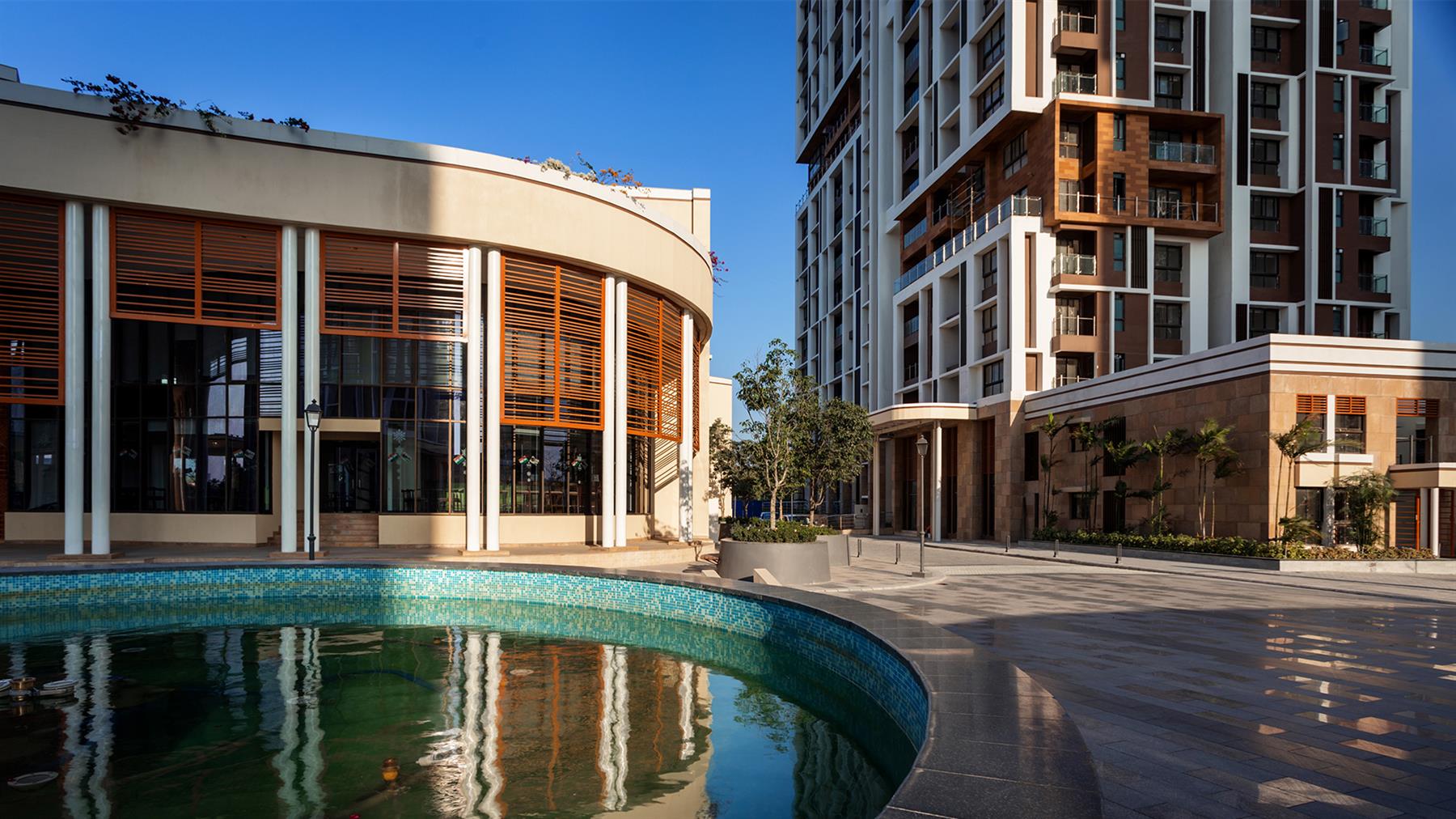 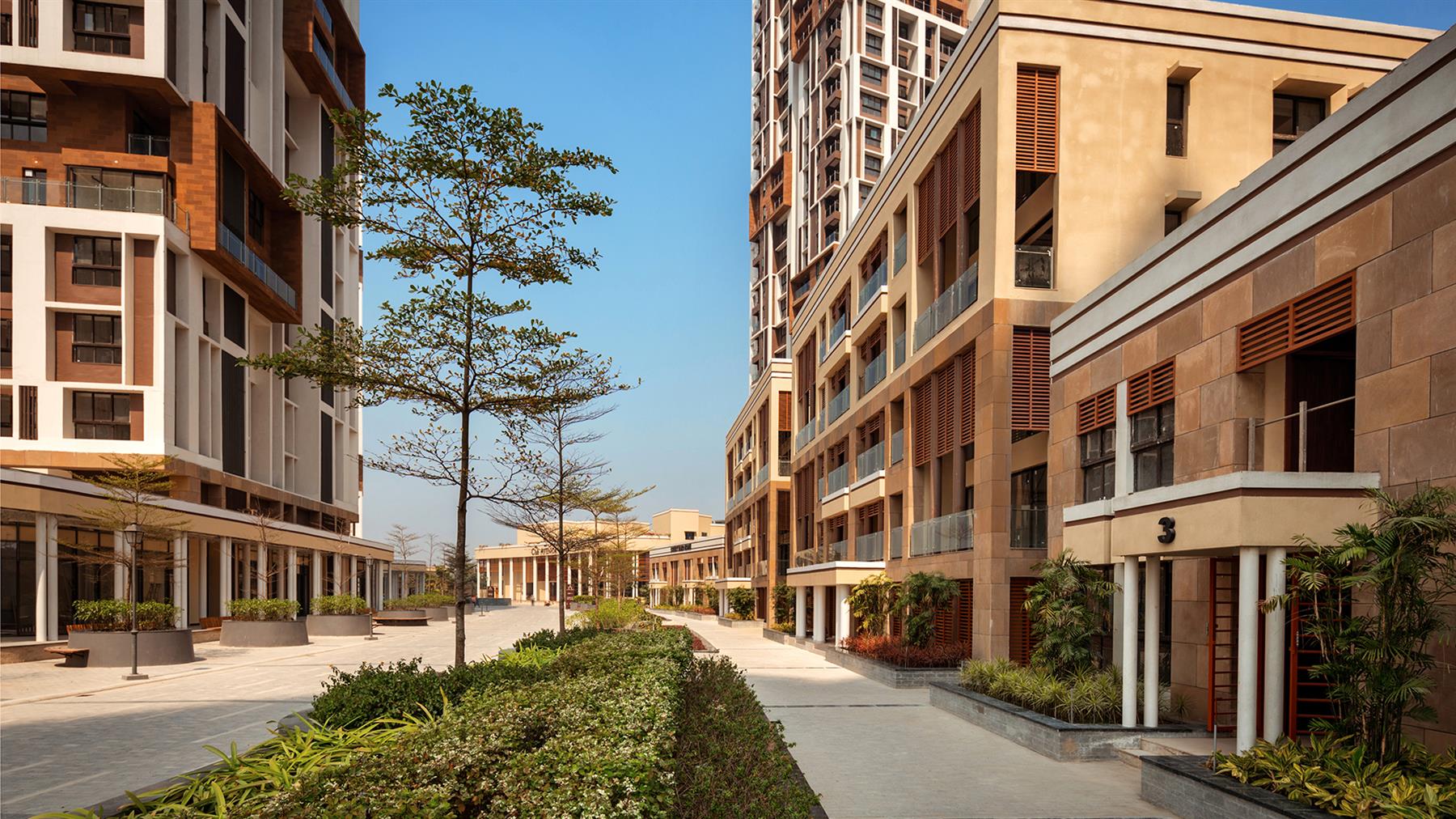 Avenida exhibits a set of spatial narratives that exemplifies the idea of an invigorated urban dwelling pattern with a strong sense of community living and shared social spaces.

The project is located at Rajarhat, a planned urban center at the fringe area of Kolkata city, with a stunning view of the rural landscape in the backdrop. The developer’s brief was to create a residential footprint of approximately 1.5 million SqFt on 13 acres of land area.

The design reinforces the idea of an identifiable public realm formalised within a tree lined central boulevard surfeited with a series of urban activities, sets a platform of social engagement for the citizens. Avenida exhibits a set of spatial narratives that exemplifies the idea of an invigorated urban dwelling pattern with a strong sense of community living and shared social spaces.

The design process started with the extrapolation of spatial characters in the urban patterns that are still in existence in the core town area that have been transforming in character since its colonial heritage era. The spatial relationship with the walkable streets, public plazas, nodes and squares were redrawn and repurposed (to the suitability of the present context) in the master plan to create the quintessential sense of place making that defies the conventional privatised and individualistic segregation pattern.

Boulevard, the public realm: The arrival plaza with an entrance gateway signifies the moment of arrival with a low rise club house holding the street edge at the arrival point. The 29 storied residential towers are planned to counterpoise the sweeping curvilinear boulevard in a radial pattern, oriented towards the South and South East directions responding to the prevailing wind pattern for maximised air flow into the habitable spaces. The boulevard epitomises the inherent socio-cultural values of our society with a series of spatial framework to hold civic activities encouraging public participation. It is a place of social interaction, recreation, cultural activities and occasional festivities. The ephemeral festival corner and an art gallery, library with an outdoor tea bar, grocery and vegetable store, ATM and health care support, corner café and a child care facility, all spread around the walkable 200 meter long curvilinear street contained within a single story footprint with covered colonnade arrangement holds space for a side walk with outdoor seating spaces, tree lines and single storied public programs that intensifies the spatial relationship with the street at human eye level. While the boulevard exhibits a vital urban quality, an elevated landscape park connected through a ceremonial stairway to the boulevard contained at the backyard of the town homes and two towers makes it a
passive zone for outdoor sit outs, to counterbalance the active boulevard.

The vehicular drop offs for all the towers happen from the secondary streets branching out from the boulevard thus alleviating the boulevard from vehicular presence, encourages more pedestrian usage. A dedicated pedestrian network connects all the programs within the site making the whole development a barrier free environment.

Spatial Character: The master plan exhibits a multiplicity of spatial character through the transitional sequence from public realm to the private and vice versa across the whole development. Spatial transition from the urban boulevard to the secondary lanes, from the elevated park to the walking trail network, from the sculpture court to the community lounge at tower base, collectively manifest the multiplicity of urban character in the neighbourhood. The base of each tower at grade is designed to house garden apartments with a front garden formed above human eye level from the adjacent street. It provides the sense of privacy to the private garden occupants and at the same time allows them to stay connected to the ground affairs, reminiscent to living in individual house. It also defines a landscape edge to the streets.

Lifestyle choices: A total of 30 atypical unit typologies have been designed to offer a large range of lifestyle choices in the neighbourhood. The town homes and the courtyard houses hold within themselves exquisite intimate sanctuaries of private nature scapes. Each tower houses a variety of unit types, starting with garden apartments at the base, intermediate duplex units at every five floors, 2 bed and 3 bed simplex units and penthouses on top create a great lifestyle mix within the tower. Every unit has deep balconies and decks as outdoor spaces.

Climate responsivity: The predominant South and South-East orientation of the built masses is a climate responsive strategy for maximizing air flow within the development. The streets, amenity spine and the elevated park remain shaded by the towers for most of the day hours. More than 55% of the apartments have assured uninterrupted views of the surrounding landscapes while the remaining enjoys views of the central boulevard and the urban brio of the public realm at the street level. The towers are also strategically planned to counterbalance any imminent high rise developments within the adjacent neighboring plots. The interior spaces are well lit and ventilated.

Architectural expression: The central idea to the architectural vocabulary is to script a language that allows achieving a singular expression at an eye level by re-engaging architectural elements decoded from the colonial heritage of the city. Two distinctively profound colonial elements, twin columns and horizontal shading louvers are reinterpreted to form a façade that continues over the amenity spine, club house and the base two floors of the towers. The repetitiveness of these two elements across a varied set of volumes imparts a part to whole and whole to part relationship within the entire street scape of the neighbourhood. Above this sits the tower mass with a façade that performs towards creating comfortable spaces inside by responding to the climatic behaviour. The deep balconies intensify the relationship with the exterior, provide outdoor space and sometimes buffer the interior zone from the exterior harshness. A combination of horizontal and vertical fins (projected from the external surface by 500 mm) around the building openings is used to create a façade exoskeleton that controls the harsh sunrays and shades the building surface providing thermal comfort to the habitable spaces inside. 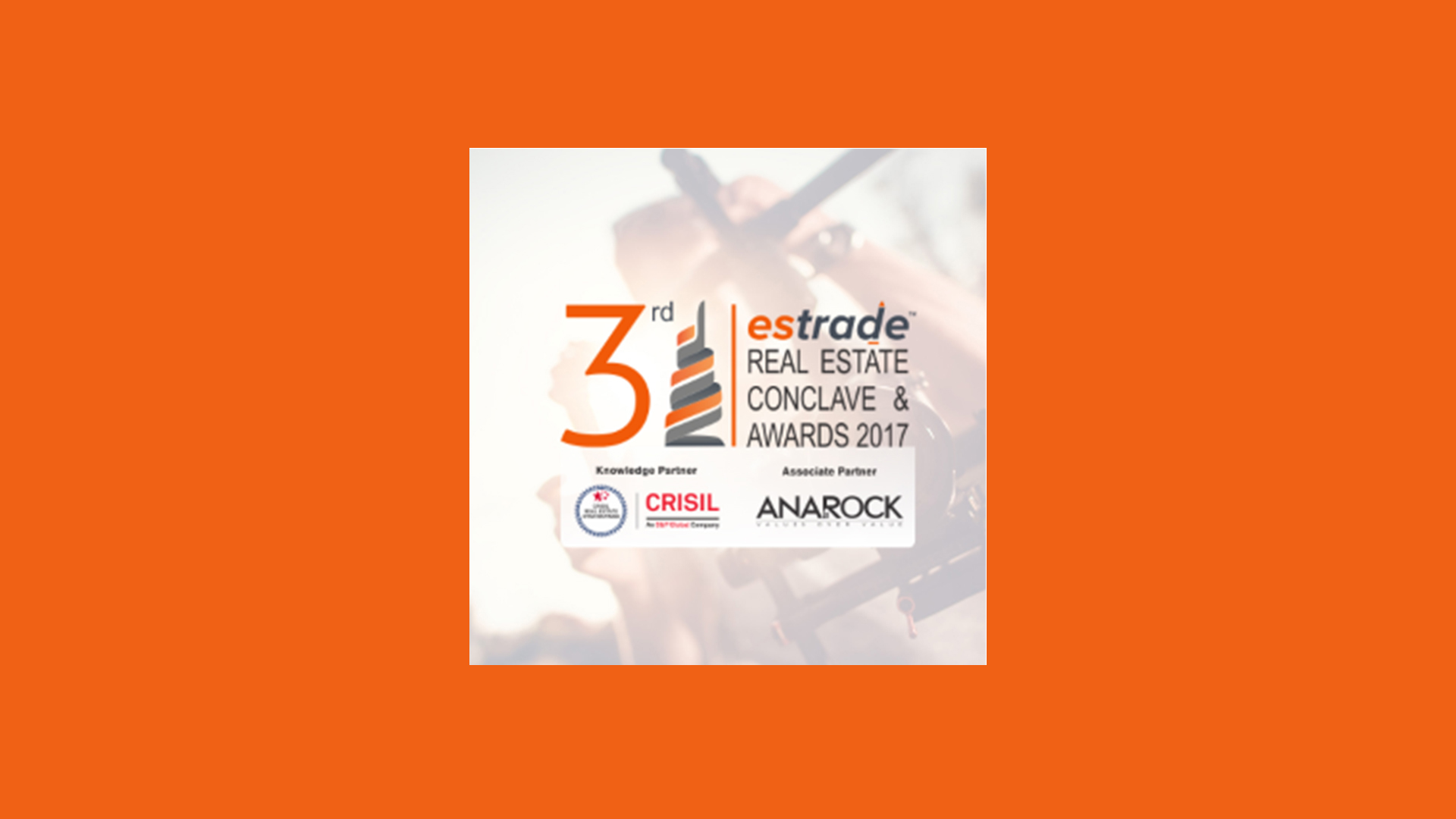 Project of the Year Award 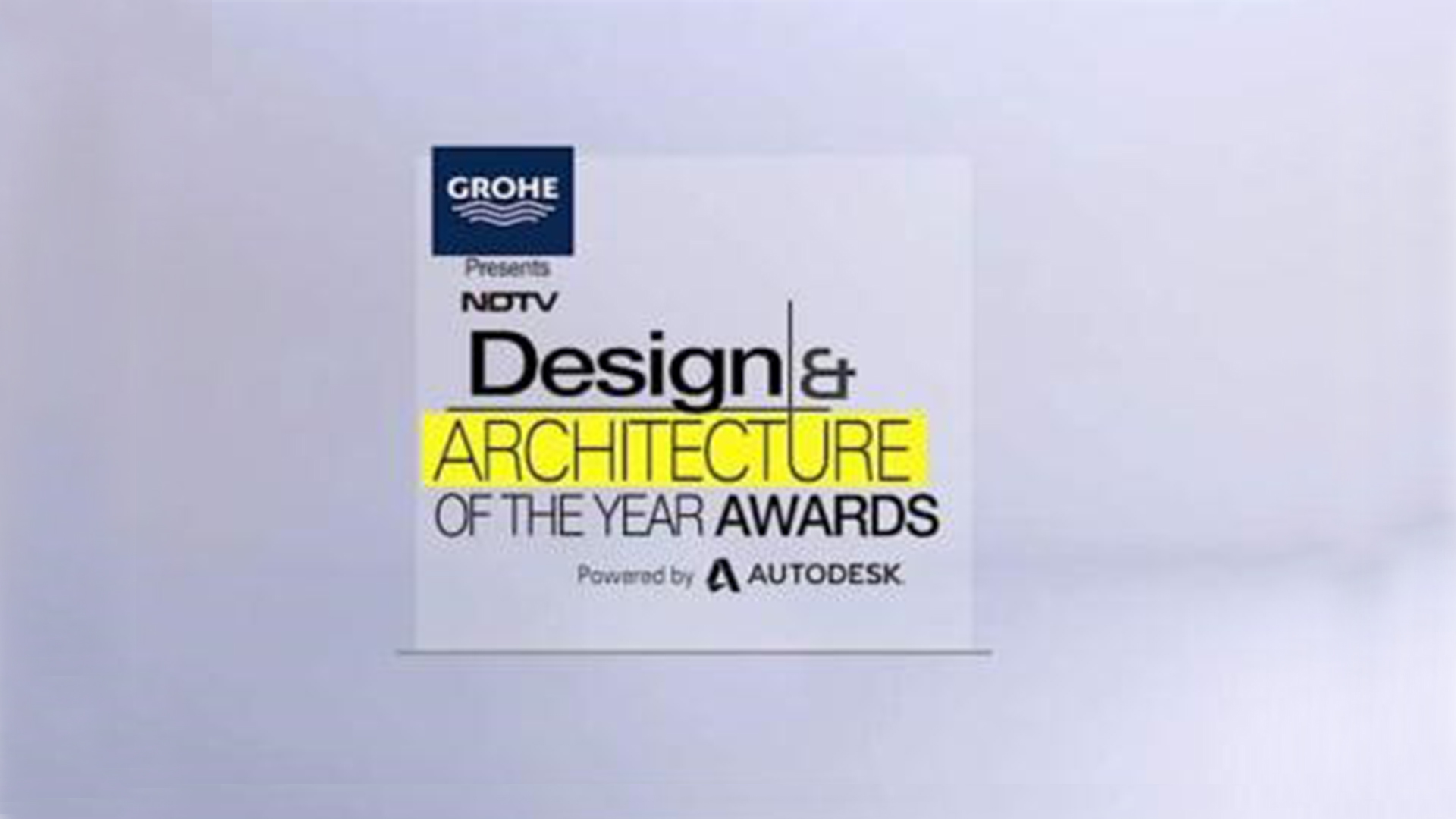 Residential Design of the Year 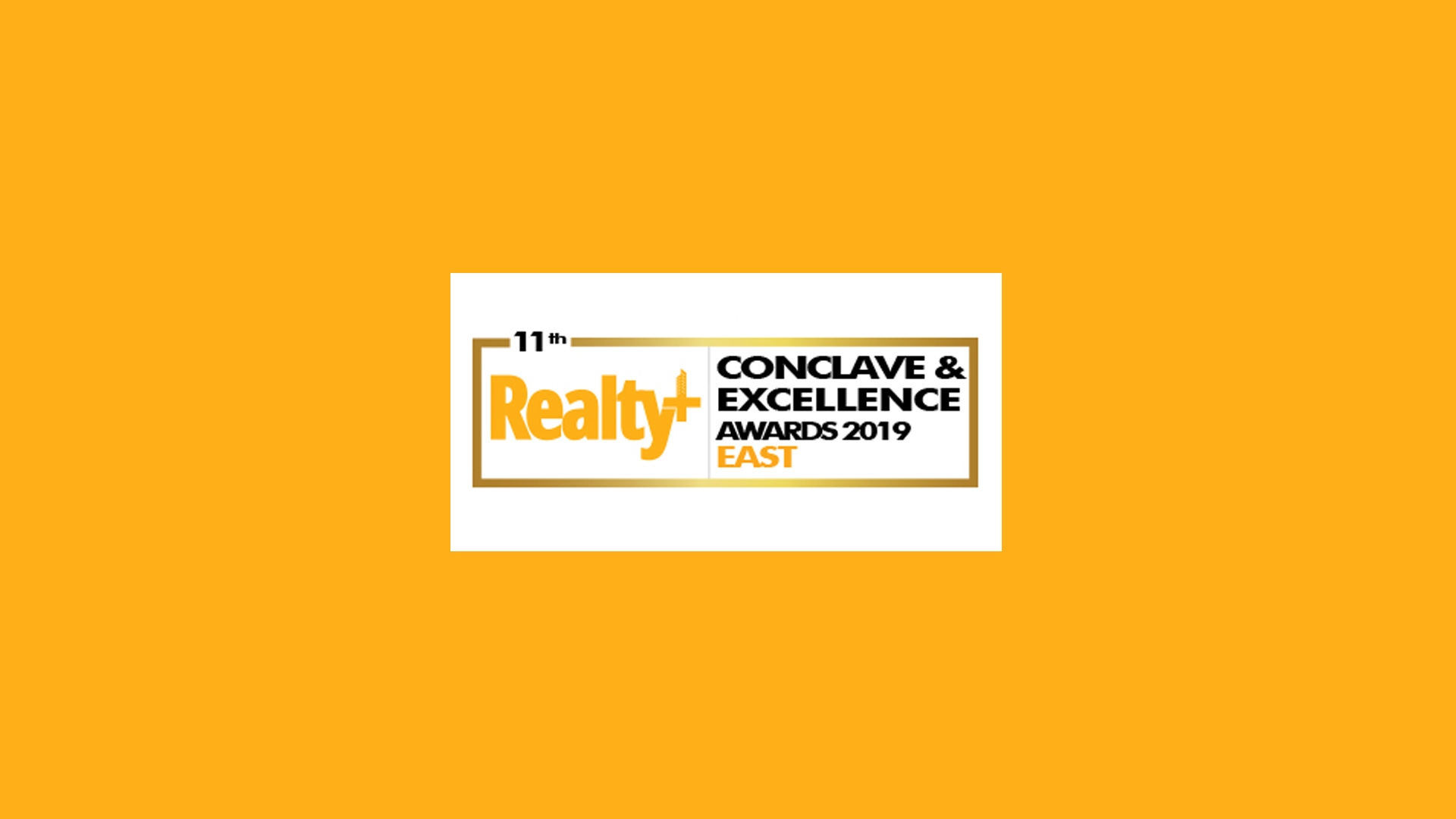 Winner - Excellence in Delivery and Themed Project of the Year 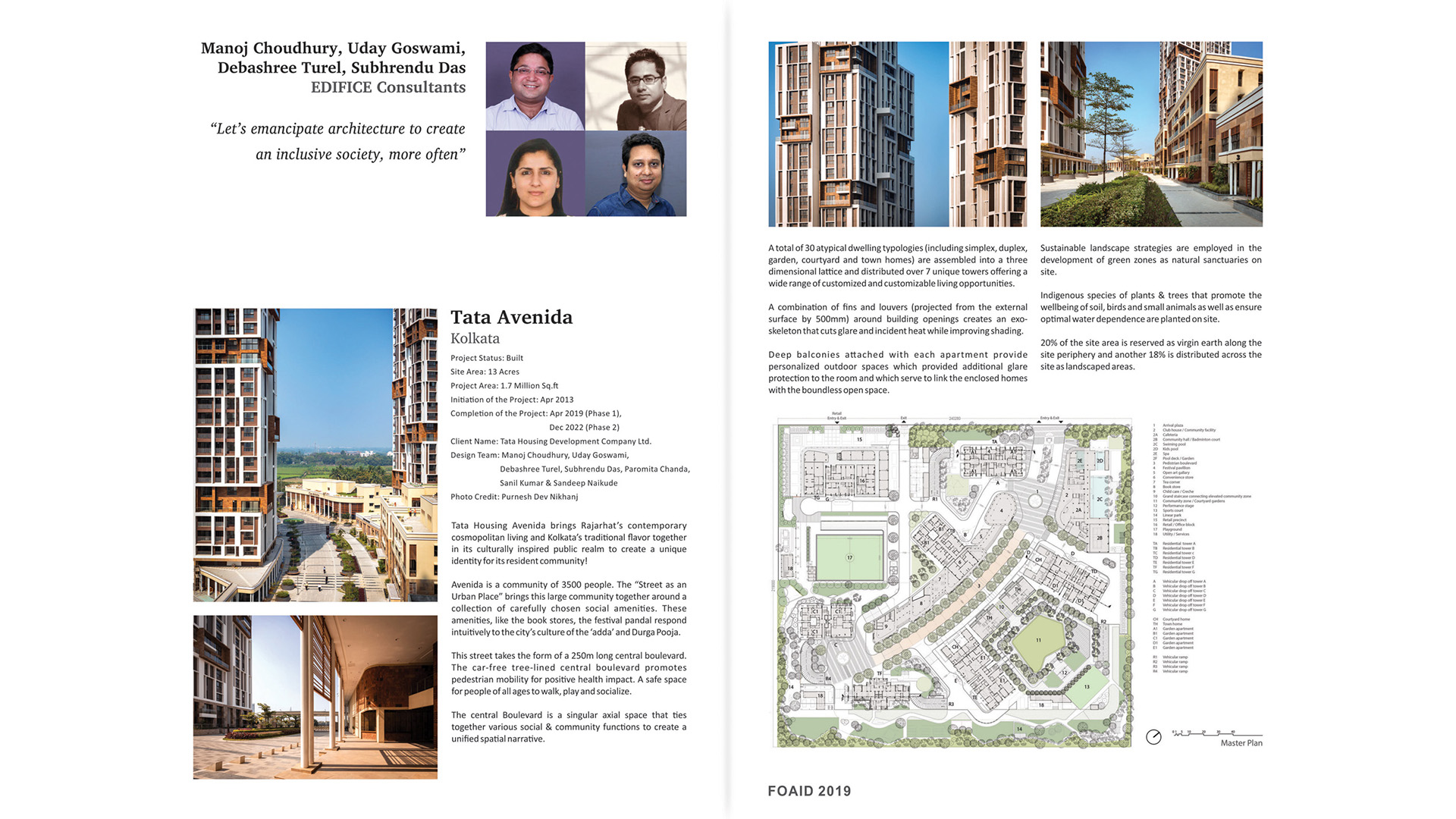 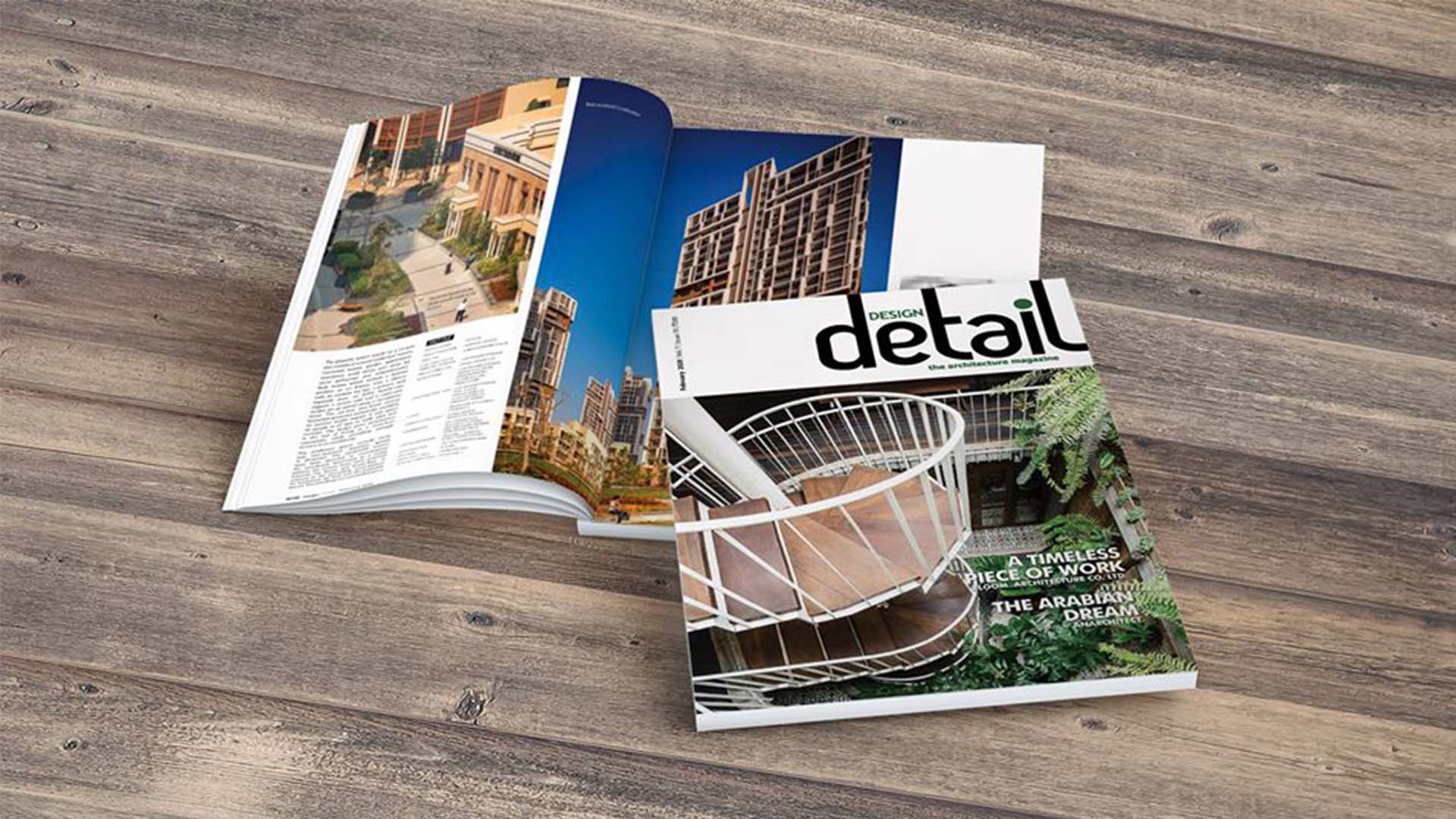