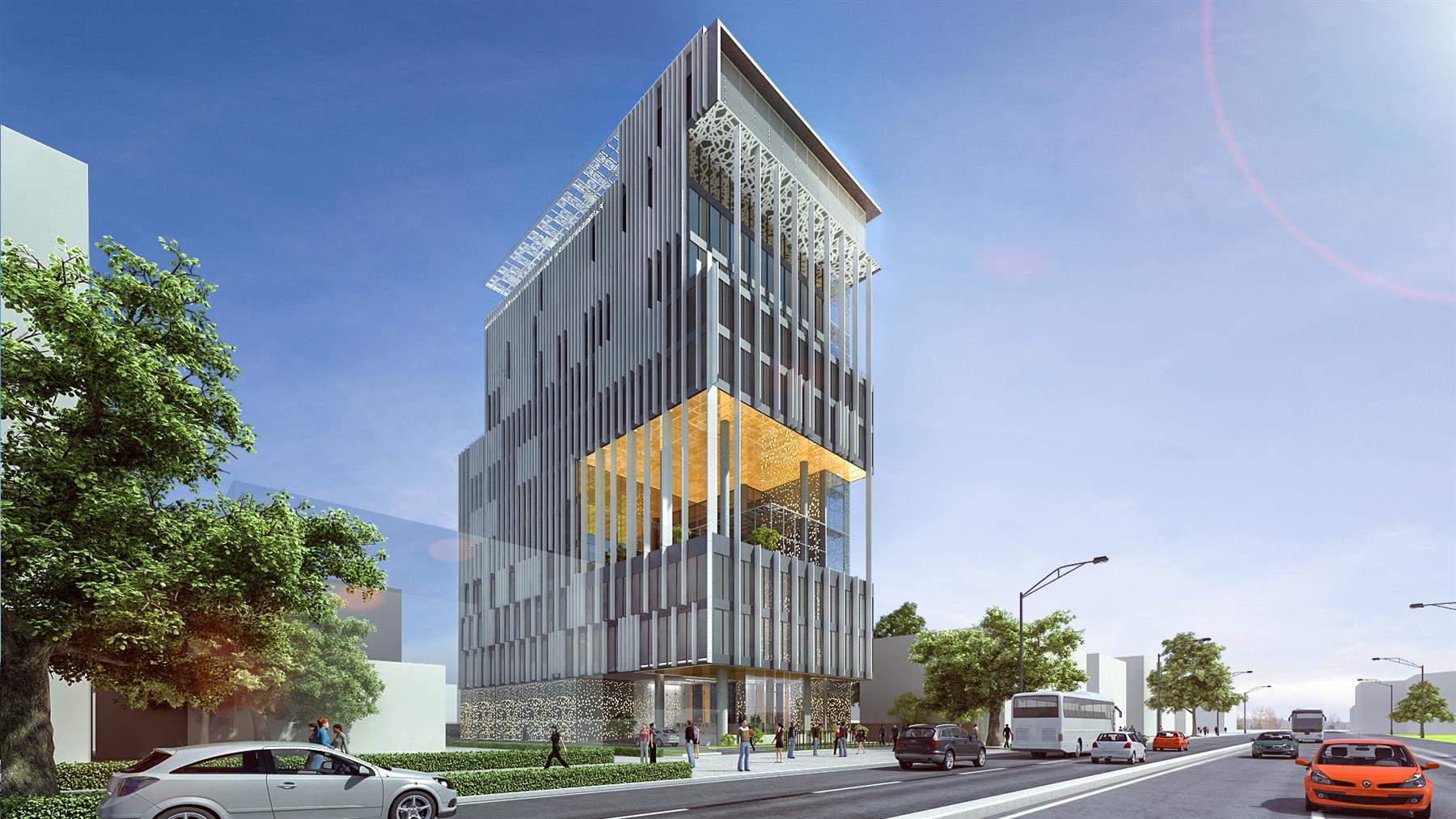 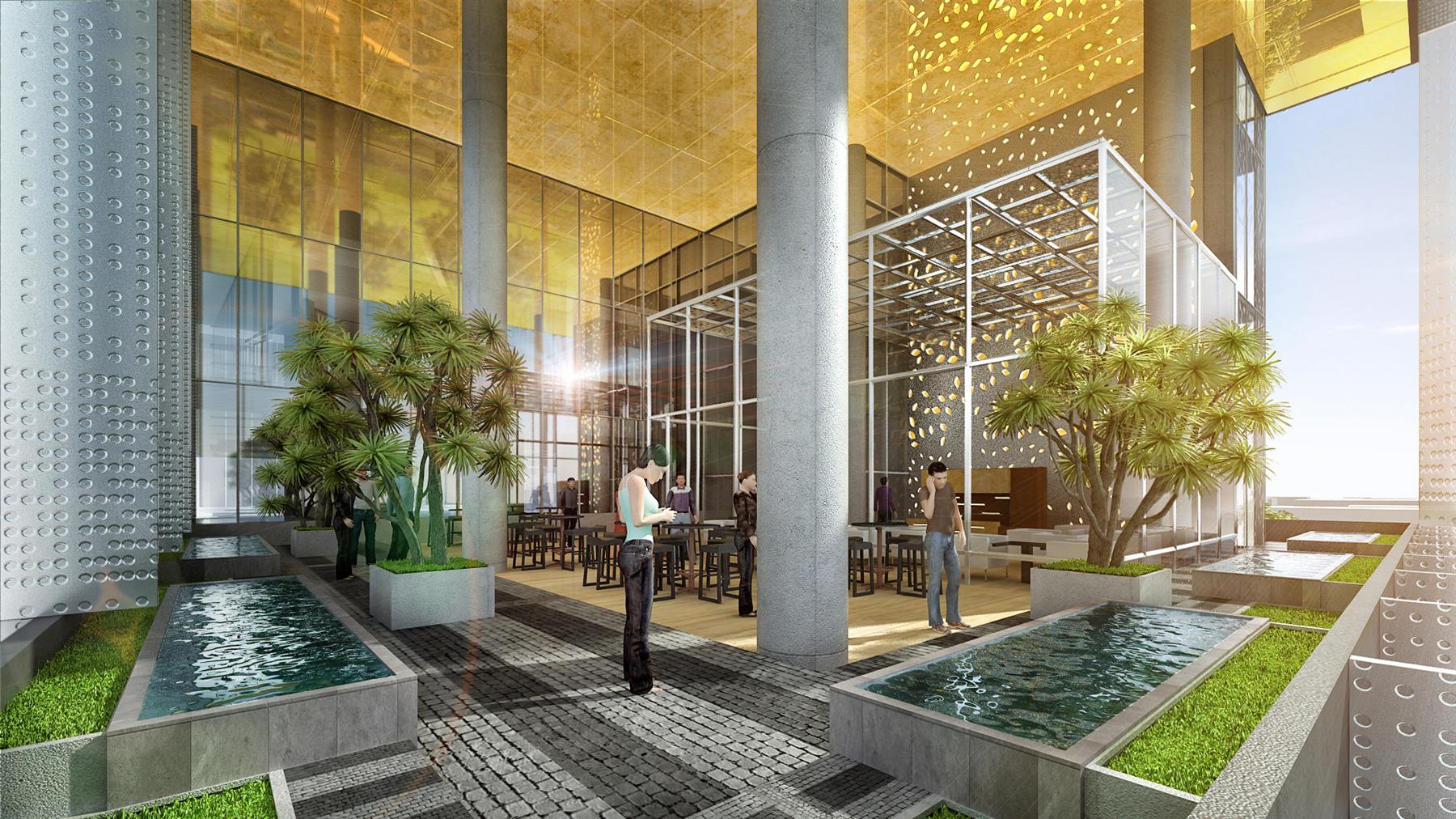 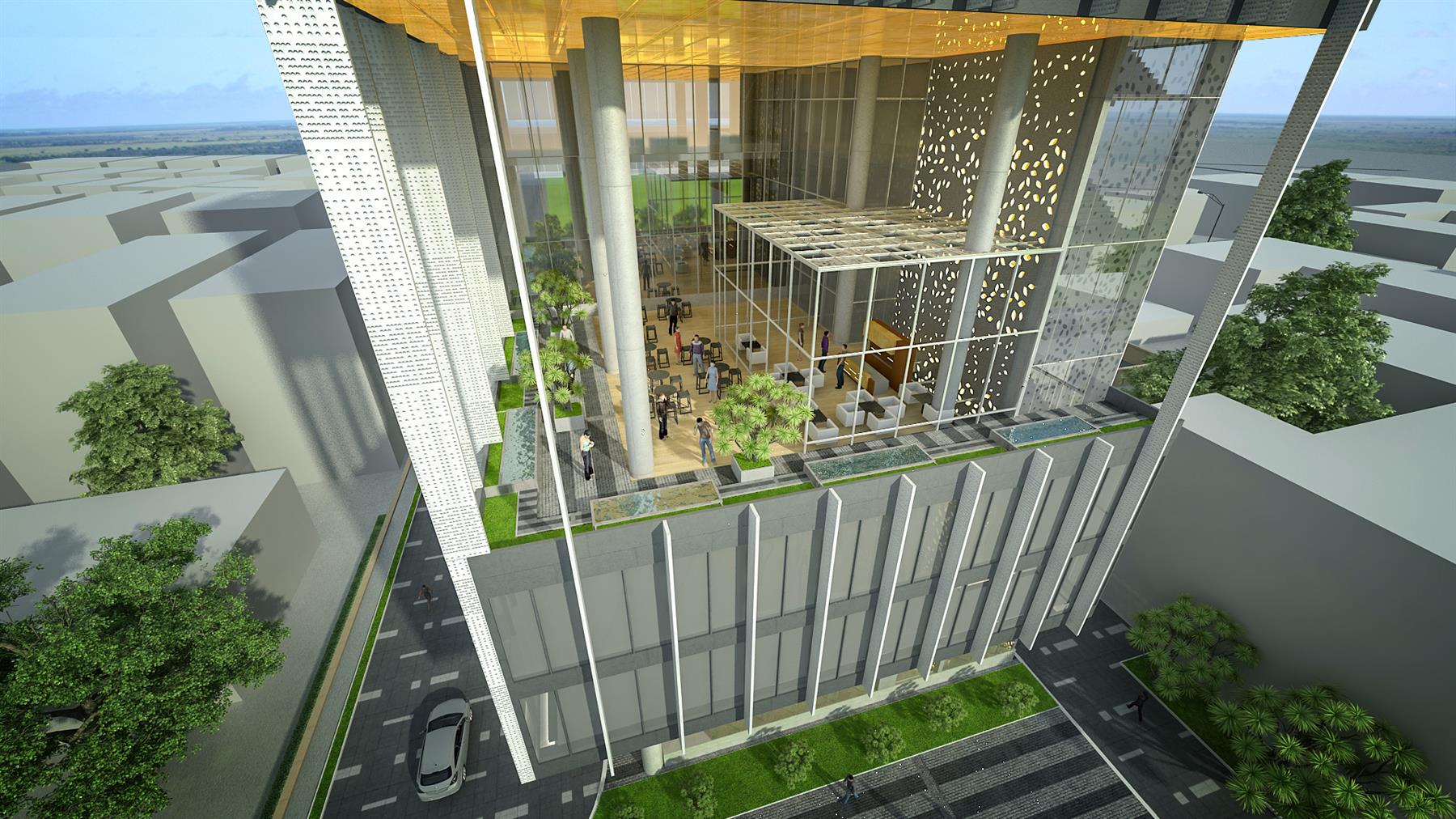 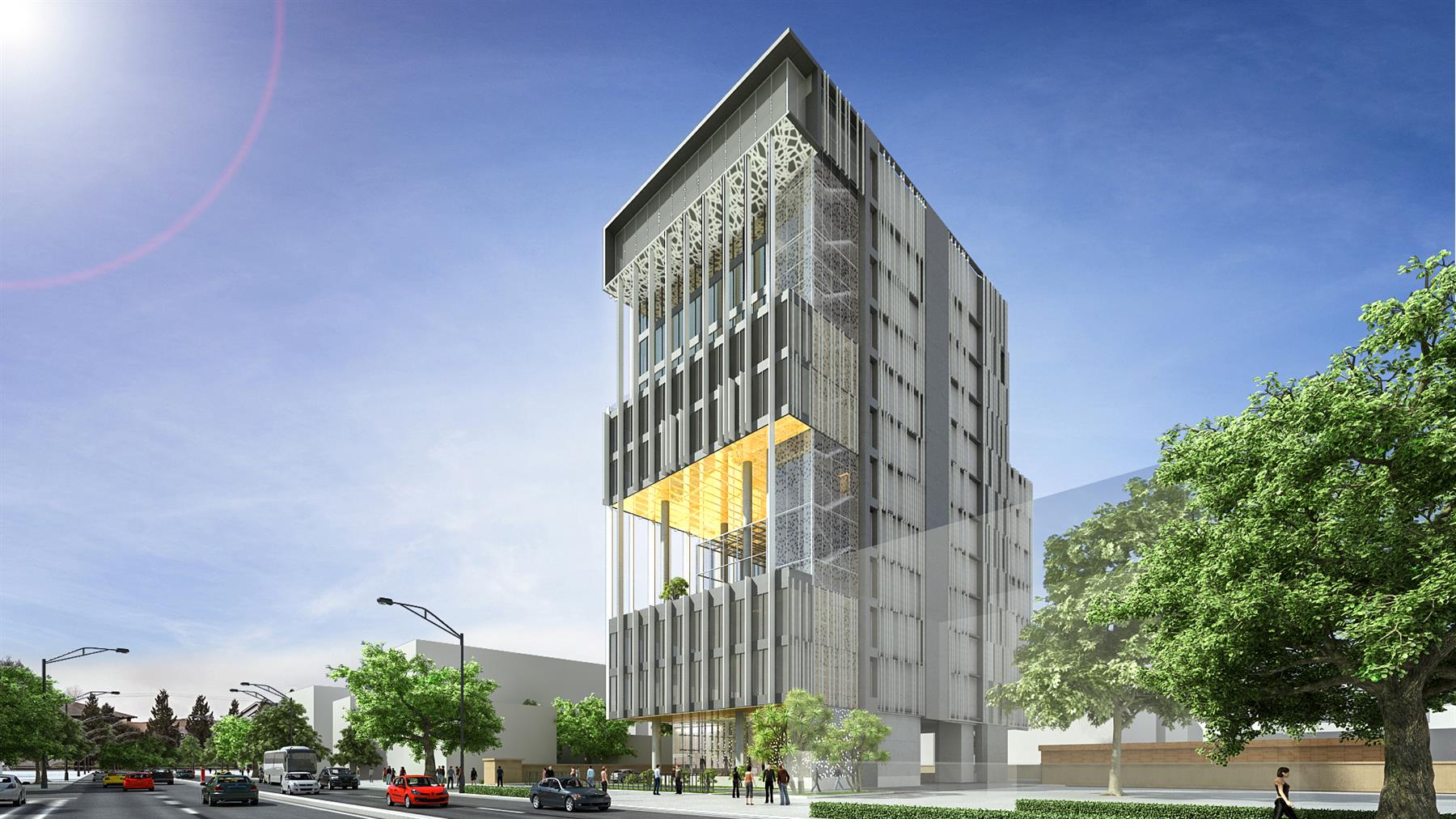 142 Rashbehari is located in the heart of south Kolkata, flanked by dense developments and a rich mix of retail, restaurants and some high end residential zones. The site is situated at a key urban node abutting a 30M prime city road and facing Deshapriya Park and Priya Cinema, both important landmarks for the locality.

While most of the city's commercial and large format offices is being developed within new planned Business Districts in the East, there is a growing demand for commercial real estate in south Kolkata, especially in the category of smaller compact offices for premium Corporate houses.  The client's brief was thus for an office building which would meet the need for compact workspaces with high quality infrastructure and a sustainable built environment.

As an office building, 142, Rashbehari in its compact form offers the end users a working destination interspersed within highly activated spaces. The building is an attempt to integrate urbanism, sustainability and flexibility appropriate to the site's specificity and project's commercial viability.

As an attempt to climatically orient the indoor and outdoor spaces from Kolkata's harsh summer and long monsoon the facade is exposed only towards the North and East. The building's core and supporting utilities placed in the west act as a protective barrier from the sun and torrential rain.  A layer of exoskeleton is proposed on the glazing to eliminate glare and also unify the facade giving it a distinct architectural vocabulary.

The proposed design attempts to establish a virtual link between the semi-open terraces within the built form and the park and entertainment node across the street. The design team explored various massing strategies to articulate terraces at various levels which will offer end users direct views of the park and the street at the north and of a lake at the south.

Each of the twelve levels in the building comprise of a simple rectangular floor plate which offers flexibility for right-sizing the office modules based on market requirements. The triple height covered terrace at the third floor is envisaged as a large social space. Each private office within the premises has access to this terrace through the elevator lobby.  Outdoor landscape along with a mini cafe makes this terrace highly appropriate for informal office meetings over an afternoon tea. At the higher levels the terraces are private extensions of indoor offices. The 12th floor is programmed as a restaurant with an extended open air deck which formulates into a rooftop feature. This diversity in the program is a response to the immediate character of the site's urban context which is famous for its varied range of eateries.

What makes this project unique: 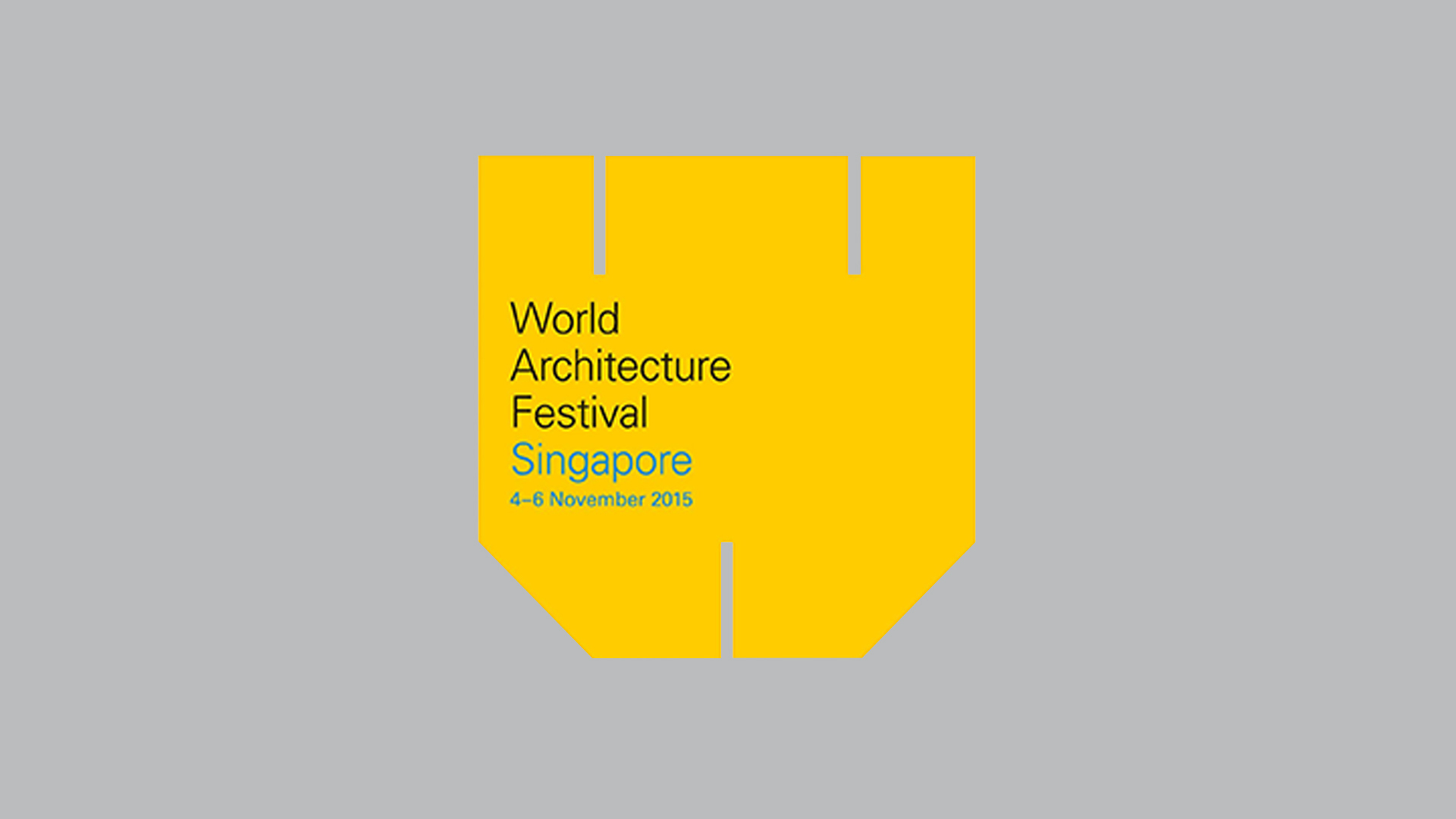